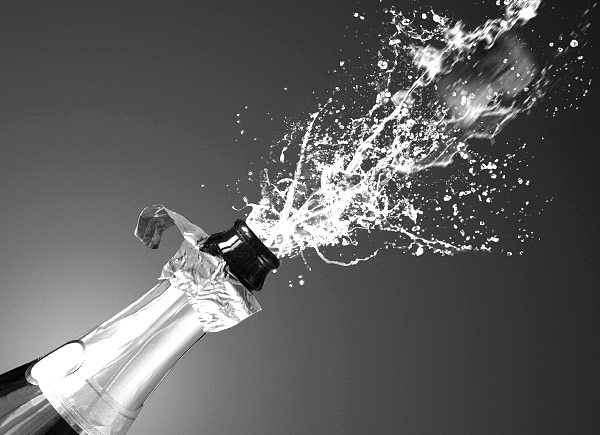 Champagne – has the bubble burst? Mimi Avery of the British wine dynasty that is Averys wine merchants, reviews the current market favourites.

Getting bubbles in the first place is an interesting story in itself. The method of producing a secondary fermentation in bottle was, often questionably, discovered by the English in the mid 1500s, when Charles Merret (who now has a Ridgeview English aparkling wine named after him, Merret) added sugar to create the second fermentation. The Methode Champenois for volume production was then perfected by the French: Dom Perignon, a monk, started at the monastery six years after Merret’s work and took forty years to complete the process. That said, Blanquette de Limoux holds the title for the first sparkling wine, well before this. Champagne production only really got underway in volumes in the 19th century when glass was strengthened by the English and could withstand the extra pressure. This along with the muselet (cage) to trap the cork in the bottle, invented by M. Jaquesson of France.

Production shot from 300,000 bottles to 2 million in the late 1800s. By 1900 it was 47 million and 315 million in 2000, around which it has hovered over the last ten years. Last year 312 million bottles were sold, sales have slipped back to the volumes of 2005 and 2006, which is not a significant drop in the current climate. Markets have expanded rapidly now, including all the emerging markets of BRIC (Brazil, Russia, India and China) along with other Asian countries. The more traditional markets have plateaued in the latest recession. In the international market, marketing is still paramount. Taittinger, for example, has just been announced as the champagne for the Brazilian football World Cup.

There is competition from the sparkling wine producers of the world, but the perceived quality and apparent exclusivity of champagne, helped by the legal case that banned the use of the term ‘champagne’ on anything but the real thing (even the Yves Saint Laurent perfume had to be re-named Yvresse), has helped champagne to hold its position and pricing in the current climate.

Current sales are fairly static, which in this present climate is seen as a positive. Much of it is drunk at events such as Ascot and Polo, but also English weddings will invariable have the toast with champagne, if not the pre-breakfast aperitif. The bubbles, as within the Champagnes themselves, are persistent and buoyant, weathering the financial storms well.

2013 is a year that celebrates both 220 years of Averys and 50 years of working with Boizel – a wonderful, family-run business. Initial contact was a visit from Christophe Roques-Boizel to this writer’s grandfather in Bristol, in 1963. This started a great friendship and long-lasting work relationship, culminating in an invitation to their 175th anniversary dinner in Bordeaux two years ago, and the release this year of a celebratory 2004 vintage bottle of Averys Vintage Champagne.

Being the champagne buyer was one of the highlights of my buying remit. Along with working with the great names of Bollinger and Louis Roederer, smaller houses such as Gosset have had great success in the shop. We also deal with family-owned houses such as Billecart and Bauchet. Bauchet was, in fact, the first wine that I ever introduced to Averys, before I was even a buyer.

Whilst employed as the shop manager, I was a member of the Bristol Junior Chamber of commerce. I met various representatives from our (Bristol’s) twinning heritage, Bordeaux, Hannover, Oporto and in this instance Champagne, as Frederic Gaulthier of Bauchet came to Bristol (because it was the closest large town to Clevedon, twinned with Epernay.) After a lively chat, samples were requested and we have never looked back. More recently, we have started work with Bernard Remy and we currently have a fragrant, multi-award-winning Blanc de Blanc 100% chardonnay of theirs.

If you like your fizz without the bourgeois feel of the high street labels, then I’ve highlighted a few of our range below.

This cuvee was designed by my grandfather to have a higher proportion of the lesser-known Pinot Munier (33% of each of the three varietals). That is because it matures quicker and therefore the wine develops a mature flavour, similar to a vintage, but in only 36 months of lees aging and a further 6 months to a year in either our or our customers’ cellars.

This wine has a lovely biscuit aroma, soft creamy texture, brut (meaning dry), but a richness on the palate which softens the acidity.

The latest addition to our portfolio, a chardonnay led blend with Pinot Noir. This is a slightly more delicate style than our Brut, the apply fruit flavours and elegent acidity gives a wine with more ‘wow’ appeal, good with food, but a perfect aperitif to make any occasion special

Gosset is a house that we have been working with for over 10 years. They are the oldest wine house in Champagne. They have a unique style using more reserve wines than most. This house brand is also Pinot noir led, which gives a soft, full and fruity style with white stone fruit and apricots, and a lingering finish.

Billecart is a seventh generation, family-owned champagne house. This again is a blend of all three and the nose and palate both reflect the percentage of the pinots, giving raspberry notes. Delicious as an aperitif, but will also go well with smoked salmon and sushi.

The Beauty Passport, our second journey

It’s been a time of change, adjustment, and uncertainty, but I turn towards the future with hope, amongst a little trepidation. Some may have snuck in some travel in the late summer months. Personally, with three European trips canceled by quarantine changes or airline cancellations, it will be a little while longer before I take my Beauty Passport internationally. As the winter months draw in and hygge vibes heighten as the days shorten, let’s take another trip around the UK for inspiration to shake up your skincare routine, add new colour to your space, or surprise someone you may be missing whilst distance may be separating us. For those of…