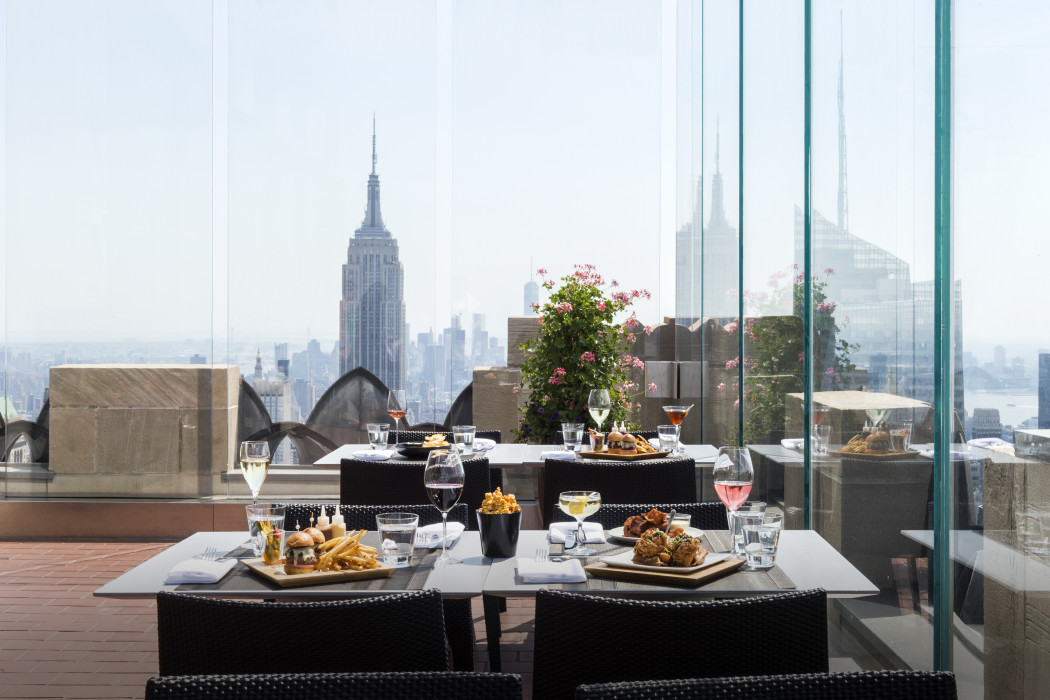 New York was imprinted on my heart back in the day of my early mad ad career working on a transatlantic airline account. The regular pit-stops gave me unbelievable bragging rights, but as a quick time check, on my last visit I was privileged enough to sit above the clouds drinking cocktails at Windows on The World on top of the North Tower in Downtown Manhattan.

Sadly not a vista I can ever re-visit. But as many moons have passed since that view was obliterated and New York’s landscape changed forever, I was super hyped to share this mesmerizing city with my family now in tow and hopeful that NYC could still pack the same kind of punch that my nostalgic brain remembered.

The start of the journey included the perfect flashback moment when faced with the ageless Continental Airlines branding, the airline that I had helped launch onto the transatlantic route. It now proudly wraps itself around all United Airlines tailfins as the two became one in 2010,  creating one sumo airline that operates over 4900 flights per day globally.

The outbound trip was completely painless with access to the United Polaris Lounge delivering an effortless pre-flight experience ensuring we could escape the frenzied duty-free mayhem of the outside world and be cocooned in its beautifully designed airy sanctuary. Of course they offer the obligatory luxurious showers, state-of-the-art tech, food for every palette and a very grand bar – apparently the longest bar in the entire airport. 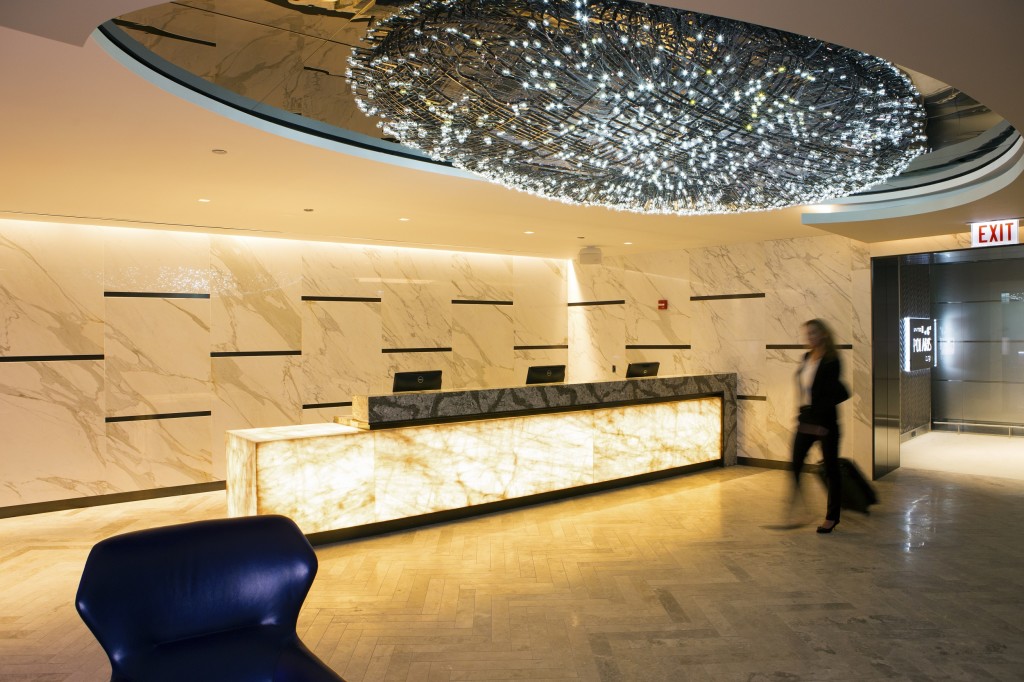 Sadly having cut our timings tight we only had a whistle-stop stay, just long enough to grab a glass of the best bubbles and a light breakfast before we hurtled down the concourse to our waiting aircraft. Note to self – I really must allow more time pre-flight to enjoy the journey not just the destination.

Economy Plus did not disappoint. It was comfortable and calming and after pre-flight drinks and a light lunch the family gorged on the in-flight entertainment, arriving in New York in what felt like a heartbeat and in great shape.

This visit to New York was as much about a deep dive into the more off-grid contemporary experiences as it was about seeing the best of the classic sites and sounds. We all wanted a large dash of the more eclectic vibe of this dynamic melting pot.
First stop was NYC Tourist Board to grab our City Passes.

An absolute must was a fast-track tour of the city’s top attractions, handpicked and packaged together at a fraction of the cost. Not only does it give you an idiot’s guide to what to see with six key attractions across a nine-day period at a lower cost, it also means in most places you can jump the line, making the City Pass worth every cent in my humble opinion!
Empire State Building, Guggenheim Museum, Statute of Liberty, Top of The Rock. Tick, tick, tick, tick.
Having walked our feet off as every self-respecting New Yorker does, and experienced being shouted at crossing the road, dodging bike messengers whilst trying not to walk into lamp posts as we gazed upwards, the next completely off-piste experience was the explosive and unconventional Blue Man Experience.
Whilst others NY visitors scrambled to pay eye-watering prices to see Broadway shows, our choice was to support this rather more quirky performance of three extraordinarily talented young men Matt, Steve and Kia, who are part of a seven-man troupe in NY, who as the name suggests are painted blue. 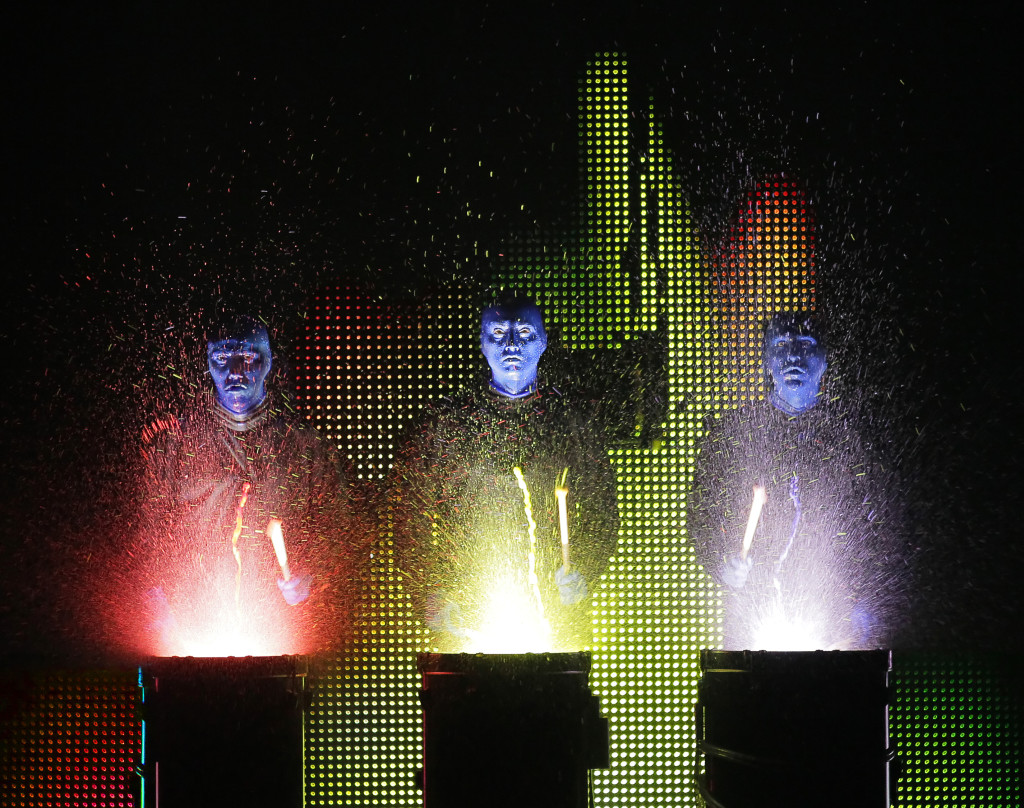 Blue Man Group grew out of a collaboration between three close friends, Chris Wink, Matt Goldman and Phil Stanton, on Manhattan’s Lower East Side back in 1987. Its first public appearance of three Blue masked men was a street procession that included the burning of a Rambo doll and a piece of the Berlin Wall. MTV, who covered the event, drew attention to the strange Blue Men, and what began as creative “disturbances” on the streets of the city became a series of small shows at downtown clubs, and eventually a full performance in 1991. In July 2017, the Blue Man Group caught the eye of the Cirque Du Soleil, who bought the company and expanded the concept.
I’m pleased to say that even with the big brother backing, it retains its authenticity. This intimate performance still held in the original home of the Astor Place Theatre in Noho is a high-energy, mesmerising show that straddles drama, comedy, art and music, yet throughout the entire performance, not one single word is spoken.
The show may be 27 years old now but it is still super fresh and a great night out. Top tip – go for the VIP option where you get up close and personal in the best seats in the house but don’t wear your best gear. Then post-show meet the powerful performers behind the blue paint in person. https://www.blueman.com/new-york/buy-tickets

No visit to the US is complete without stepping into their intoxicating sporting world.  It’s a fundamental part of the DNA of this nation and our trip collided with the New York Jets playing at the MetLife Stadium, just outside Manhattan, against the Houston Texans.
But let’s be clear, the extent of my American Football knowledge rests in once attending a Super Bowl party in London and being able to name a few vintage players. Namely The Fridge, Joe Montana, Dan Marino and OJ Simpson – a complete lightweight. 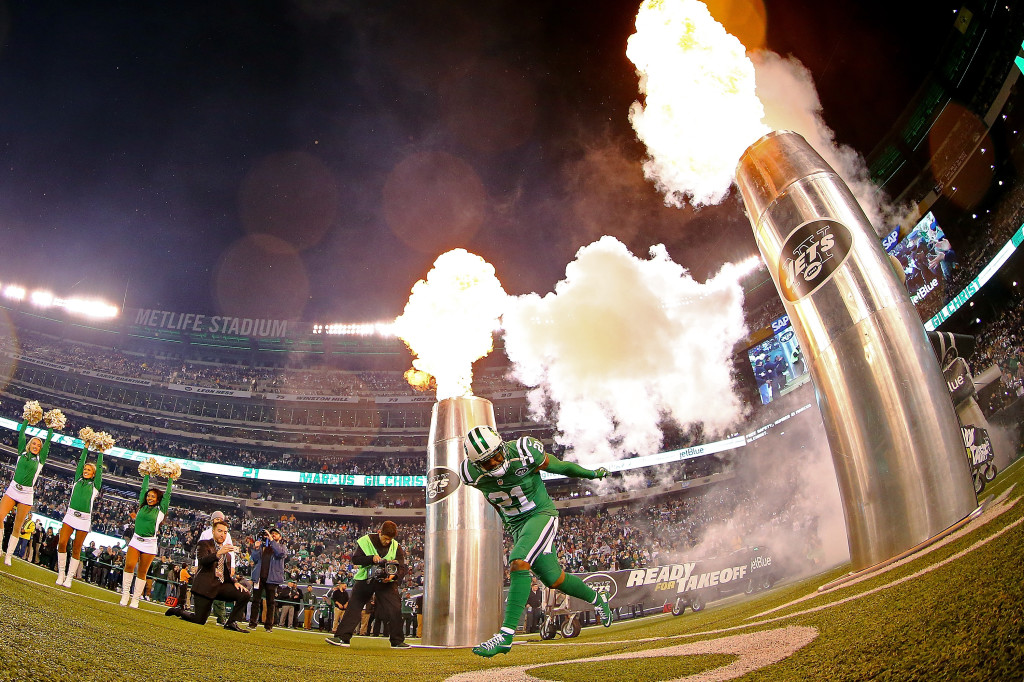 The energy as we reached the arena was hyper-charged, almost tribal, so we were very grateful for the invitation to the New York Jets 50 Club that gives VIP access to the best field-side seats at the 42-yard line. A dedicated swanky bar serves complimentary food and drinks throughout the game and if you get there early enough, pre-match access to stand on the field just yards from the visitors’ bench to immerse yourself in the magnitude of this gladiatorial game.
The opening ceremony is a spectacle in its own right with the man-mountain players running onto the field accompanied by Olympic size pyrotechnics, the American anthem belted out by a tiny singer stood on a box and an almost gridiron-sized American flag wafted around the arena to ensure no one escapes the nationalism that this game celebrates.

It’s a rather strange mix of intense play with uncomfortable pauses to fill the advertising gaps and then switches from offensive to defensive teams. But somehow these disjointed breaks are filled with the rather clichéd cheerleaders and the additional entertainment of watching the crowd reach an almost fever-pitch level of excitement.
Houston scored the first 13 points and never really looked back. Steve Slaton, who led the AFC that year in yards from scrimmage, looked terrific. The rookie ran for 130 yards and two TDs. He had a 46-yard reception and a 40-yard touchdown run.
Any idea? Anyone, nope, the short answer, they won.

Another flip of the coin from conventional to unconventional New York saw us heading to Brooklyn to submerge ourselves in the raw and bold street and graffiti art scene with Graff Tours . Bitterly cold, our small group of six, headed out to streets that in a previous time would not have been off-limits. Now these guided street tours by graffiti artists themselves share their passion and knowledge of a world that is intoxicating. Stories of an era that originally were a painful scar on the NY landscape.
In a matter of a few hours we learnt about the alchemy that gave rise to the cult of graffiti, its humbling origins driven by gang warfare that forced teenagers to tag as a memento to their life as they feared their existence stood for nothing, the intricacies of the art and the social comment that screams from the buildings. It was only the near frostbite that drove us back to the studio where one of the original taggers, Staff 161, gave a lesson in this powerful art form that now straddles political and cultural comment, artist talent and a new level of commercial acceptance. 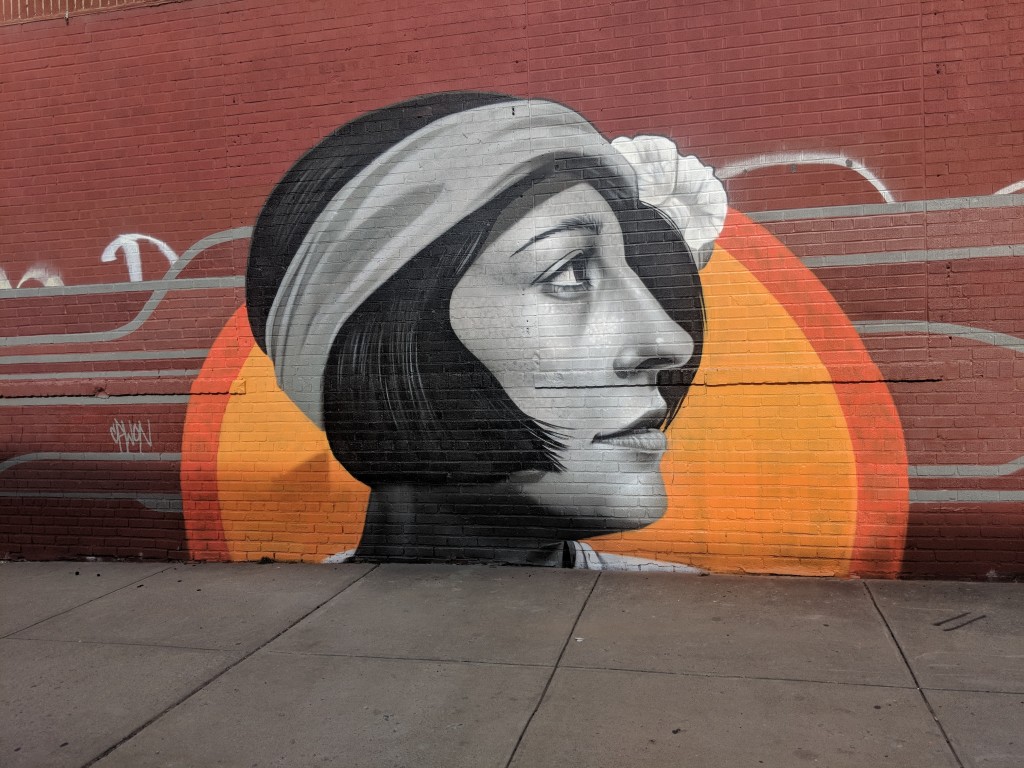 Our final evening in New York was spent at the heady heights of BarSixtyFive, part of the beautiful Rainbow Rooms, which sit above New York City’s landmark Rockefeller Center.
Impeccable service, sumptuous cuisine and lashings of Taittinger Champagne whilst enjoying arguably the best views of Manhattan all wrapped in a glamour overload delivered the final goose-bump moment of this trip. 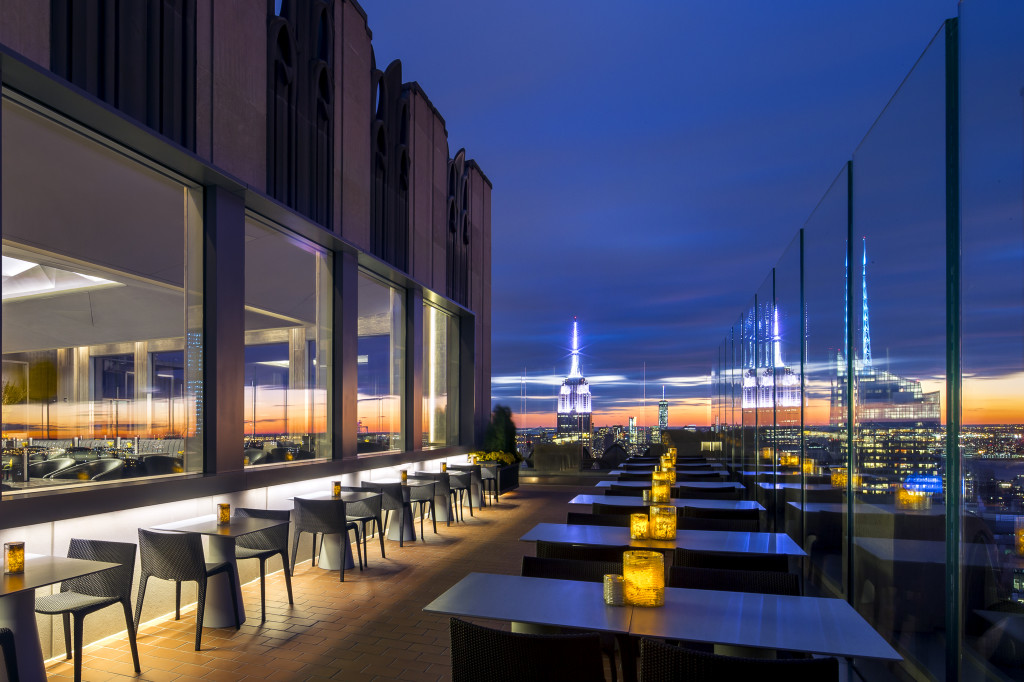 This city still thrives on its iconic classic sights and sounds but for me, the off-beat, off-piste New York that we experienced is far more intoxicating and colourful and offers a whole new level of rich bragging rights.

The Vessel, NYC’s Interactive art piece and the Observation Deck opening in 2019, will be the highest outdoor terrace in NYC
Hudson Yard: https://www.hudsonyardsnewyork.com/

Pier 17 is a must see.
iPic Theatre a new dine-in theatre bringing all the comforts of home (and fancy cocktails!) to the movies. https://www.ipictheaters.com

The William Vale – one of the coolest hotel in all of Brooklyn and BEST views of Manhattan skyline from the roof restaurant, Westlight.  They also have a meadery connected to the bottom, just opened by Dylan Sprouse, and down the street from the winery https://bkwinery.com and Brooklyn brewery https://brooklynbrewery.com/verify ) https://www.thewilliamvale.com/
Brooklyn Chocolate Tour – they take you to all stops where you get to try each place’s chocolate https://www.asliceofbrooklyn.com/bus-tours/chocolate-tour

And don’t forget Chelsea Market, The Meatpacking District and The High Line.

Is there one remaining gap under the tree? Are you running out of ideas for that last little beauty present?
Take a look at our quick guide to last-minute stocking fillers and small gifts.