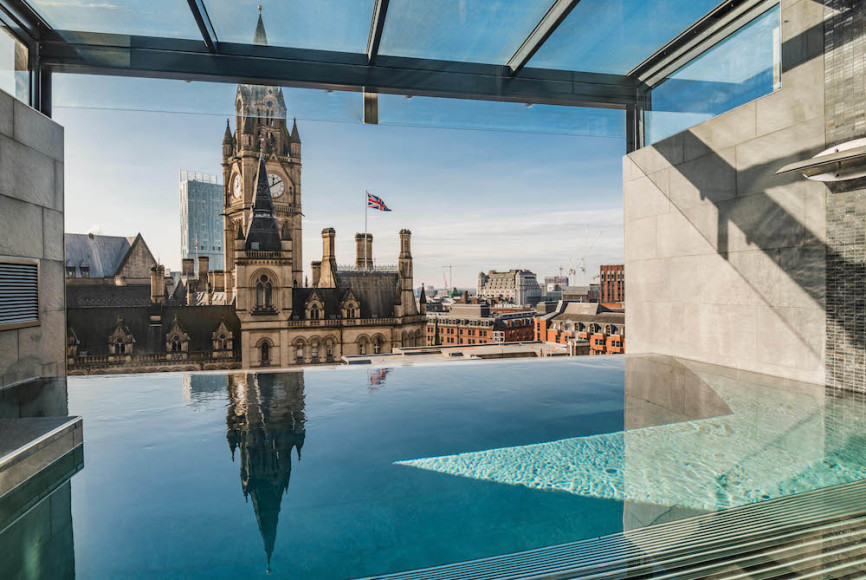 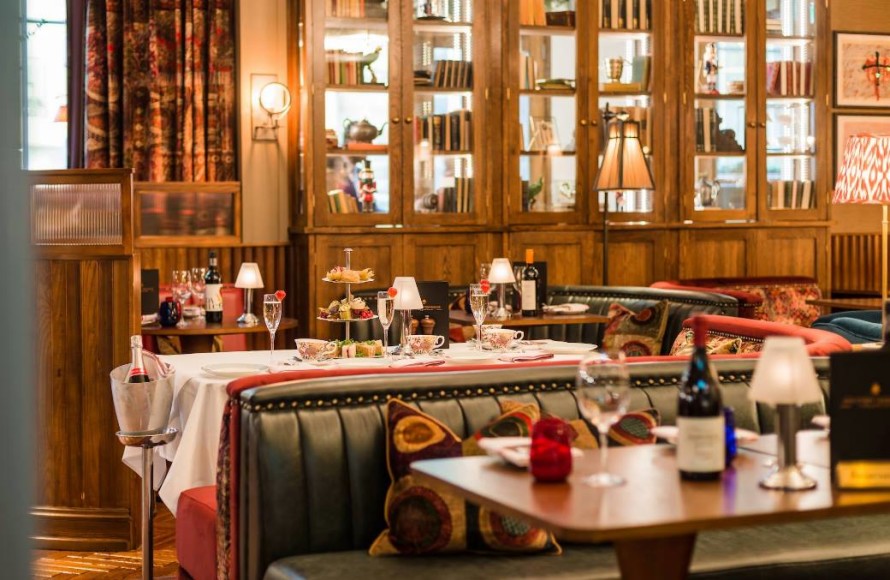 I was last in Manchester for the opening of what was literally a high-level drinking venue – and that was some time ago now. The sounds of the Hacienda that inspired a generation at the hand of Tony Wilson are long since gone too. Groove remains in the heart, but the club that once ‘was’ is now apartments. There has been much construction and sights that remain familiar still exist, but the ‘Madchester’ scene is still alive, vibrant and going from strength to strength. Watch this space, as where The Review goes, others will follow.

Having passed Mr Wilson’s old temple of sound. I turn down more modest back streets, which take me close to the set of one of Britain’s longest-running television programmes. I can almost hear the opening trumpet and expect to see a feline on the rooftop at any moment. Entering Great John Street, I am now presented with a rather impressive three-storey, tall-windowed, Manchester red-brick building. Such is the beauty of the residence, with its Lego-like cream and rust columns, that you cannot fail to be impressed by the presence it exudes.

The reason for this gravitas is clear: this was, in fact, originally a Victorian school house where, no doubt, the previous attendees felt a degree of trepidation on arrival. But not me, as I was welcomed enthusiastically by Tom in reception. A neat, tidy area, presented immaculately, painted in mid-grey, with a complex chandelier illuminating the space that Her Majesty herself would be proud of. Already, I felt I was entering a tight ship, where there was a place for everything, and everything had its place. Umbrellas sat to attention ready for guest use, and the hotel baggage truck was brightly polished.

Great St John Street became a hotel in 2005, and is part of the Eclectic Hotels Group, owned by Eamonn and Sally O’Loughlin, who are particularly hands on. At every stage of the development, they insisted on small details, like the bespoke wrought iron railings, which replicate originals and are a constant theme throughout the hotel. Staff talk of Sally visiting with new ornaments, personally deciding where things go. Now that is genuine passion. Rooms are photographed, making sure that, every time you visit, your favourite spot will feel like home.

The previous school links are charming and dealt with sympathetically. There are pictures on the first floor of previous pupils, many of whom have visited since. Old newspapers show old class photographs and illustrate the tales I’m told of the children educated here, who travelled the canals with their bargee parents. The staircases, too, are still denoted as ‘boys’ and ‘girls’, as each had separate entrances when this was Atherton Street School. The original rooftop playground (can you see health and safety allowing that these days?), the headmaster’s office, and classrooms still retain their identity in name.

On the ground floor, you have the Oyster Bar, wonderfully moody and relaxed with deep comfy sofas and luxurious armchairs. On our visit, it was interesting to watch its daily evolution through morning coffee into relaxed lunch, afternoon tea space, and then to a very accomplished cocktail bar. Above, you have a mezzanine level and a breakfast room, where I can vouch that nothing is too much trouble. If you are a fan of avocado on sourdough with poached eggs, you will be in nirvana. The request to tweak mine with my favourite ingredients was confidently agreed and expediently delivered.

Moving from the Oyster Bar into the Library, you enter a world where Mr Lifshitz himself would be most at home. Or as you probably know him, Ralph Lauren. Sally has picked up the styling cues of preppy-chic-meets-the-Hamptons and bowled it right back at Mr L. Union Jack and Stars and Stripes cushions meet big squishy sofas. This makes it a very homely space in which to enjoy afternoon tea. In fact, afternoon tea is back, and big in Manchester, with both the Library and Oyster Bar busy with people enjoying homemade cakes, a sumptuous selection of sandwiches, and a selection of nine teas.

Before I left the bar area ,I enquired, as I always selfishly do, what the house champagne was, expecting a standard offering. I was pleased to find out it was Montaudon, little known in the UK. And on quizzing Claire, the general manager, she told me that staff within the group, including herself, had visited the house in Reims, so they understood the quality and history of what they were offering. Light, lemony and refreshing, it is a sound choice.

Moving to the roof of the property, you’ll find a multiuse space. There is a large function room that is very popular for weddings A portion of roof terrace is tastefully hedged for guest use only, and an another area caters for summer barbecues or winter ski lodge fun. The view across the rooftops in the sun is mesmerising and, out of the corner of your eye, you can just glimpse that famous Mancunian terraced street. I changed my vista, having never been one for proletariat broadcasting.

Great John Street boasts 30 loft-style rooms and suites, 14 of them being ‘comfy duplex rooms’. All are individually designed and retain their original features of exposed steel beams, brushed brickwork and restored wooden flooring. This décor, relevant to the building’s age and style, prevails throughout the hotel’s rooming: all have a mezzanine-level, railed with the signature wrought iron. The attention to detail in the open plan bathroom is commendable, with oak wooden flooring, large format tiles, walk-in rain shower, and cast-iron, roll-top, two-person tub. The rooms have that individual touch, so often missing, and feature unique prints, individual headboards and goose-down pillows.

The 10 luxury junior suites increase your room space by roughly half, a combination of single level and duplex rooms. Individuality is taken to a further, in terms of fixtures, fittings, and with bespoke colour schemes and luxury fabrics and textiles. Again, high-level bathroom fittings prevail and quality tiling. The four eclectic suites are double the size of a comfy duplex room and are designed with an emphasis on style and comfort. Antique crystal chandeliers, sumptuous fabrics and flamboyant colour schemes prevail.

Two opus suites of approximately 625-square feet dominate the offering, as do the huge windows that shower the room with natural light. These have been secondary glazed to ensure the building’s features are retained and have a solar mechanism for opening and closing. There is a very calm and glamorous feeling to these rooms, and I could easily be in a loft in Brooklyn from first impressions. The ground-floor houses a lounge area, with a library of books, refrigerator, large screen television, and a comfortable sofa. An antique trunk forms the coffee table, adding to the warehouse feel, along with a restored Art Deco fireplace and crystal chandelier. Behind a concealing wall, on this, the ground floor, are his and hers basins and a separate toilet and rain shower. Toiletries are by Spa and the most comprehensive I have ever seen, including shaving oil and balm for the gentlemen.

A staircase leads to the mezzanine level with, again, the signature railings. A freestanding wardrobe and desk frame the super-king bed and ottoman. In the corner of the room is an elliptical two-person bath, fashioned from stone, giving that feeling of decadence. The only criticism I can level at this stage is minor: afurther wardrobe would be useful if two people are staying, rather than having to share. Also, to view your clothes side, rather than to reach back would be better. This stops you accidentally dislodging items you don’t want to wear and avoids the potential of a treasured dress ending up creased on the wardrobe floor. Sometimes function should be over form.

The overall ambience of the room, with its greys and lavenders, and white bed linen is tranquil. The practicality of a mezzanine level was proven when friends arrived for drinks and were able to access all they needed downstairs. Room service was quick and efficient and little touches like homemade biscuits added that very welcoming feel. A comprehensive tea tray was provided, including fresh cold milk every day. It’s this attention to detail that adds a genuine feel of luxury. The decor in my room was fresh and there is obviously a detailed program maintenance throughout the hotel.

The hotel itself is situated the Castlefields area of Manchester, and therefore well located. Canal-side walking and the vibrant bar and restaurant scene are only a five-minute walk away. The Arndale Centre, Harvey Nichols and Selfridges are a 10-minute walk through boutique lined streets. My car was whisked away from me on arrival and returned unscathed on departure by very efficient valet parking. It is advisable to book this in advance.

The Great John Street Hotel is exactly that: great. It is what I call an R&R hotel, in that you could just make it your destination for rest and relaxation, not moving all weekend from your suite. However, with the vibrancy that Manchester is now exuding, it makes a excellent destination hotel to explore all that the city has to offer. At Great John Street, you can dine like a king and party like a prince, and relax on the roof. Now, where did I put that trumpet?

I should start by talking about the provenance of the local area, of the coastal beauty of South Devon, and the steeped history that the Cary Arms and its outlands hold. I should regale you with grand tales of the gaff yawl “escape” and the vision as she rounds Long Quarry Point.