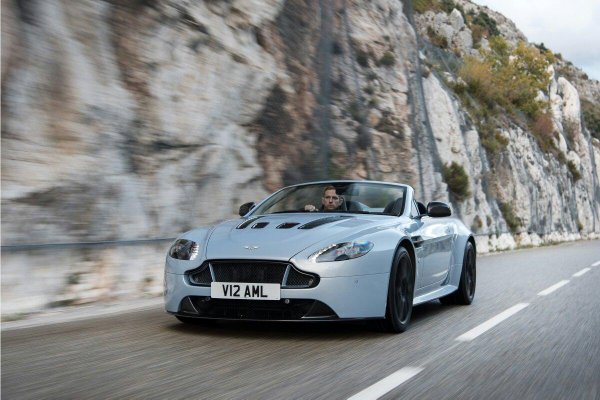 It all started as I was entering 3:15am into my alarm. Strangely, I was not worrying about the time but whether I would be able to get any sleep at all. The anticipation of test driving the new Aston Martin V12 Roadster, and of all places, in Monaco, made sleep a bit of a non-starter. It reminded me of the feeling I used to get on Christmas Eve as a nipper.

Having secured a few hours’ sleep, it was off to the airport. It felt odd flying solo for a change; usually I have the Rugby boys in tow. It made a difference to know that I could sleep on the plane without fear of waking up with black marker lines across my face.

Having secured a double espresso in an effort to wake myself up, I started to people-watch. I can’t help but wonder why it’s acceptable to drink alcohol at any time, night or day, purely because you’re in an airport? There was a group of 70-year-olds drinking champagne at 5:30am en route to Dublin. I bet they had a great time.

When I arrived at Nice airport, expecting the sun of the Cote D’Azur, it was pissing down and felt more like Wales than the South of France. With my bags in tow, I found my driver and we were off for a short but breath-taking drive to Le Cap Estel, which would be my home for the next two days.

I’m used to a pretty high level of service but wasn’t expected a personal butler for the weekend. That said, the suite was the size of a five-a-side football pitch and had three balconies with a 180-degree view of the Med. It needed a staff. With limited time to stow my gear and have a quick look around, I headed downstairs to meet the group for a light lunch on the terrace, overlooking the crystal clear sea.

Having flown, slept, ate and drank, I was ready to be shown around the new Aston Martin v12s Roadster. We were then put into pairs and shown how the car worked. I was tantalisingly close. I could have shot off, outflanked the gent giving the talk, had the keys away, and been on the road before he could have stood up again. I needn’t have planned an attack; we quickly set off into the sun (with no sunglasses). It was a great route through Nice and the harbour, with everyone turning to admire the beauty of the roadster, then up into the chicanes and corkscrew bends and into the stunning mountains.

After we had ascended the mountain, victorious, it was time for a pitstop of coffee and tarte tatin. It was worth stopping, as during the next leg, there would be a photographer hanging out of the boot of the chase car taking snaps.

The v12s Roadster will take you from 0 to 60 in four seconds. I can personally vouch for it. It made the hairs on my arms and neck stand on end for a straight jaw-dropping twenty miles of coastline. The sound was unbelievable; the v12 roars like a pack of lions. You could see people turning their heads in the rear-view, trying to work out what had just shot past.

After a blistering day of both sun and speed, we headed back up the drive of Le Cap Estel to reluctantly give back the keys to the v12s. I strolled around her one last time, thinking which one of my kids I would home school in order to buy one.

Later that night, after another brief encounter with my suite, we were treated to a wine tasting and spectacular supper at Patrick Raingeard’s Michelin-star restaurant. The conversation flowed and went from how exceptional the car was to the 2015 Rugby World Cup. Also, everyone wanted to know why I had the largest suite, let alone three baths. I quickly changed the discussion back to the car at every opportunity.

After dinner, Marek Reichman, design director at Aston Martin, spoke of how he and his team came up with design for the v12s roadster. This only made it worse for me. At this point, I was trying to work out how I could either make a getaway with the keys back to Wales, or perhaps sell the Harley to buy it.

The next day, I got up nice and early to enjoy everything that Le Cap Estel had to offer. Post-workout, I took a dip in the salt water infinity pool whilst looking out over the rough Mediterranean as the waves rolled in. I asked if it was possible to have scrambled egg whites, as I had no protein with me. Within 5 minutes, there was a knock at my door and I was again eating on the very large table in the lounge. With a double espresso in hand and my butler on call, it was hard to think about tearing myself away from the suite.

As we were waiting for the Mercedes people-carriers to arrive and take us to the Columbus 40-metre hybrid super-yacht, there was a lot of buzz in reception with interviews and photo shoots taking place. They all had one thing in common: everyone agreed how special the v12s driving experience was.

Arriving in Monaco, we drove along the marina. Obviously the boats got bigger and bigger, until we were into the serious yachting arena. When we finally stopped, my tongue rolled out of my mouth. The Columbus 40S hybrid was stunning, boasting five double bedrooms, three lounges and a hot-tub on deck. It just kept on giving.

True to form, after ten minutes, some of the Brits were feeling a little seasick and decided to head back to the hotel. That left two of us to keep the stiff-upper-lip, Aston Martin spirit alive. Given the choppy weather, the captain had advised that it wasn’t safe to take her out of the harbour. That didn’t stop us enjoying an amazing meal aboard whilst David talked about Monaco, what it stands for in day-to-day business and the experience of living there. He was a really interesting gent.

During the meal, the heavens opened and the wrath of God’s own hand seemed to appear. Kevin from Aston Martin said that Nice airport was closed and all flights were likely to be cancelled. Happy days, I thought. I could spend a little more time on the €15.5 million super-yacht – if you twist my arm. Only if they park the v12s next to it, of course, for another spin. You have to properly complete the look, don’t you.

Sadly, a few drinks later, the weather changed and the flights were back on. I have to say that it was an unforgettable trip, not to mention the team at Le Cap Estel and David for hosting us aboard the yacht. As a sportsman, I can’t say I knew entirely what to expect. But it’s up there with some of the most memorable rugby games I have played in.

Like most of our editorial team, Alix joined due to a chance meeting with our publishing director at Brands Hatch. Alix is a former Welsh rugby union footballer, who played at Number eight and was captain for the 2009 season at Brive in the French Top 14, having signed from the Llanelli Scarlets in 2008. Be under no illusions, Popham played for Wales, earning 33 caps and is a bonafide legend. Post rugby you are most likely to find him trying to convince people that cycling is worthwhile as he takes part in global two wheeled events.

Spring into self care

PHA’s provide a shallow exfoliation to gently brighten skin, perfect for pre-makeup. Lemon, sugar cane, licorice root and chamomile condition the skin to leave it glowing even more. Massage on, leave for 15 minutes and remove with a damp washcloth. Embark on your look for the day.