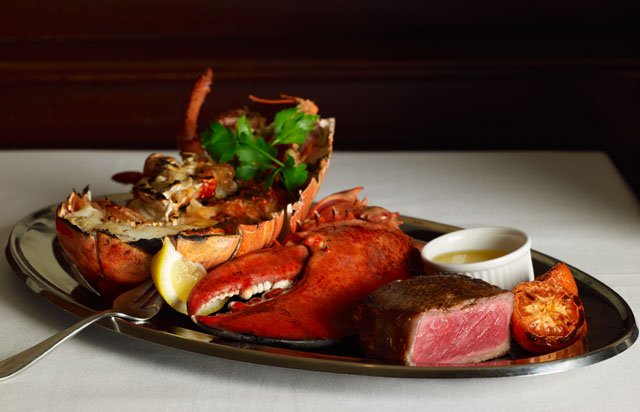 I was looking forward to Palm, mainly because of its ethnicity: an American steakhouse in London. Steak is properly Yankee. Where the French do poncey fillet mignon, America serves cuts of beef that are bigger than a trucker’s steering wheel. I’d recently been eating pokey bits of meat with dribbles of sauce, so was ready to tuck a table cloth into my shirt collar and tackle an animal in gravy; something I’d have to dislocate my jaw to eat.

The menu is definitely, definitively American. Everything is bigger and better, like Toys ‘R’ Us on a plate. To start, we shared jumbo shrimp and calamari fritti. The portions were perfect. I’m sick of being served exceptional food but left wanting more. The jumbo shrimp, sautéed in a dijon mustard sauce, were jumbo to the point of mutation. These weren’t ordinary shrimp; these were Chernobyl fallout shrimp – menacing, voluptuous and juicy. And whatever late-night, marijuana-driven experiment put prawns and mustard together was an absolute revelation.

I’ve been eating too much squid recently, which has been useful for one thing: judging good squid. This was decent calamari: tender, cornmeal-crispy and tossed in lemon and pepper.

The waiter, a likeable and solicitous chap, brought a platter of uncooked steaks to show us. It was like staring at an autopsy as he discussed the anatomical origin of each cut, the benefits of marbling, and the cooking procedure. If, like me, you already know this stuff, it can seem a touch patronising. However, objectively speaking, for those who don’t know their rump from their elbow, it’s an affable touch.

Despite the waiter gently goading us towards beef, I had other ideas: surf and turf, but with rack of lamb instead of steak, and lobster instead of prawns. Obviously.

Certain foods are innately theatrical. Lobster and rack of lamb are two of them. It arrives, you stare, you smile, you contemplate, you fawn. And considering how greatly prized these two foods are, their enjoyment depends on just two things: quality of meat and timing of cooking – and the chef is only responsible for one of those things (a cut of meat may be well sourced and look appetising, but not even a chef knows what’s going on inside it). The lobster was warm and tasted like a mermaid’s top half. Too often it’s the opposite. The rack of lamb was huge by British standards, verging on cartoonish, and arrived with a rosy, blushing interior. Not as potently lamby as I’d have liked, but still enjoyable.

Key lime pie came next, along with New York style cheesecake. This was my first and last key lime pie. I get why the yanks like it, but it’s not for me. New York cheesecake was proper cheesecake, the Judeo-Eastern-European kind, with a dense, curdled cream and acerbic raspberry sauce.

Palm has received a lot of snobbish flak from fellow critics who obviously despise the fact that an American chain has landed on our precious, culinary doorstep. It’s utterly baseless, seething pomposity. If you want the true story, Palm is an informal and egalitarian night out, where the food is appetising and plentiful, and the waiters don’t make simple requests seem like they’re doing you a favour.